You are welcoming your third child, how exciting! Tell us a bit about your family.

Where did you grow up? What was your childhood like?

My childhood was unique. My parents did the best they knew how. I was born to average height parents and a year later they adopted a brother of short stature. We grew up in the best of both worlds, with average height and little people! My brother, Bourn, has become my best friend and the children are obsessed with Uncle Bourn. In 2001, I decided to pack my bags and move to Los Angeles to become a singer. Lol. I knew a handful of people and had only $300 in my pocket, but haven’t looked back since.

You’ve spent some time as a performer in Las Vegas. Tell us about that.

In 2007, I was asked to headline a show in Las Vegas at Krave, a nightclub attached to Planet Hollywood. The show was called “Little Legends.” I started impersonating artists in late 2004. Though it wasn’t what I dreamed of, it was a way I could sing for a living and that was a dream. Mini impersonating became such a hit, it brought me out to Vegas where I headlined as Mini Britney Spears. Less than a month into the show and I was performing in almost every other number.

You film Little Women: LA. How does filming and family life mix?

With that said it’s brought an awareness that many of the family little person shows glaze over. It shows we fight, we cry, we struggle, and it’s real, but life goes on. It also shows how we overcome these struggles in life and hopefully motivates others to overcome their own hurdles.

This pregnancy was a surprise for you and Joe! How did you find out the news?

The third pregnancy blew us away. Penny was in the hospital for her 4th ear tube surgery and I was bedside having my 3rd set after 30+ years. (Side note, ear tubes are common for our type of dwarfism called achondroplasia). They took Penny for surgery at 6:00am and I was to go in at 6:30am. Around 6:20 we hear nurses screaming “Dr., Dr., DR!!!! We have a situation.” Meanwhile Joe and I are freaking out because we know Penny is in surgery so all we were thinking was what happened to Penny?!?!

Out of nowhere, you’d think we were in a daytime soap opera, the room curtain is dramatically pulled back and my ENT says, “Terra, I can’t put you under anesthesia today, you’re pregnant.” This happened literally minutes before going to the operating room. The day before I took a physical and they said nothing, but that morning I peed in a cup and the tables turned “pregnant.”

My first reaction was pretty emotional. I immediately started crying, more out of fear than joy. Meanwhile, Joe’s jaw was on the ground with a deer in headlights stare. My fear was rooted from our family having too much on our plate. We just got out of heavy water with Penelope having brain surgery a year ago, and honestly didn’t know if we were ready. Since then we have come to be grateful for this bun in my oven. A lot of prayers and letting go of the stress of the unknown and embracing the soon to be bundle of love.

How are you feeling this pregnancy, compared to your other two?

This has been the easiest pregnancy so far. Hopefully I’m not jinxing it only weeks away from my 3rd trimester. To clarify, no pregnancy is easy. But out of my three, this one feels this one feels like a walk in the park. I’m sure a large part of it is because I’m distracted by two toddlers running me around like a crazy woman.

During my first pregnancy with Penelope I started at 90lbs and ended up gaining more than 1/2 my body weight. How dumb was I? Plus being little, your joints have a hard time handling all of that extra weight. I didn’t lose all of the weight before getting pregnant with Grayson 6 months later. Your first pregnancy you feel like you want to give your baby everything you’re craving. By your second pregnancy you never want to go through that hell again, so you tend to monitor yourself. I gained 55 pounds with Penelope, lost 30, gained 18lbs with Grayson, and lost it all thanks to Dancing with The Stars. Lol. My goal this pregnancy is to only gain 12-15 lbs. I’m at 10lbs so I’m not sure how realistic that goal is.

What is your favorite part about being pregnant and your least favorite?

My favorite are the kicks that I share with my baby. It’s something you share alone with your baby. No husband can understand that joy. I remember letting Penny listen to music and the first song she reacted to was “Shake it Off” by Taylor Swift. My husband said she was probably trying to shake off the headphones because she hated the song, but I could tell she was enjoying it. Least favorite part is a toss up … the lack of sleep due to being super uncomfortable or the limitations you have like food restrictions, flying restrictions, no hot baths, little to no coffee, the list goes on.

What’s one piece of advice you received that impacted the way you parent?

Every child grows at their own pace. Don’t compare your kids to others. Especially raising two little people (possibly three) it’s important to not compare their achievements in the first few years to an average height child. In fact, don’t compare to other little people either. It messes with your confidence as a parent and everything works itself out. Just help your child to reach their milestones on their time frame and everything else will be fine. 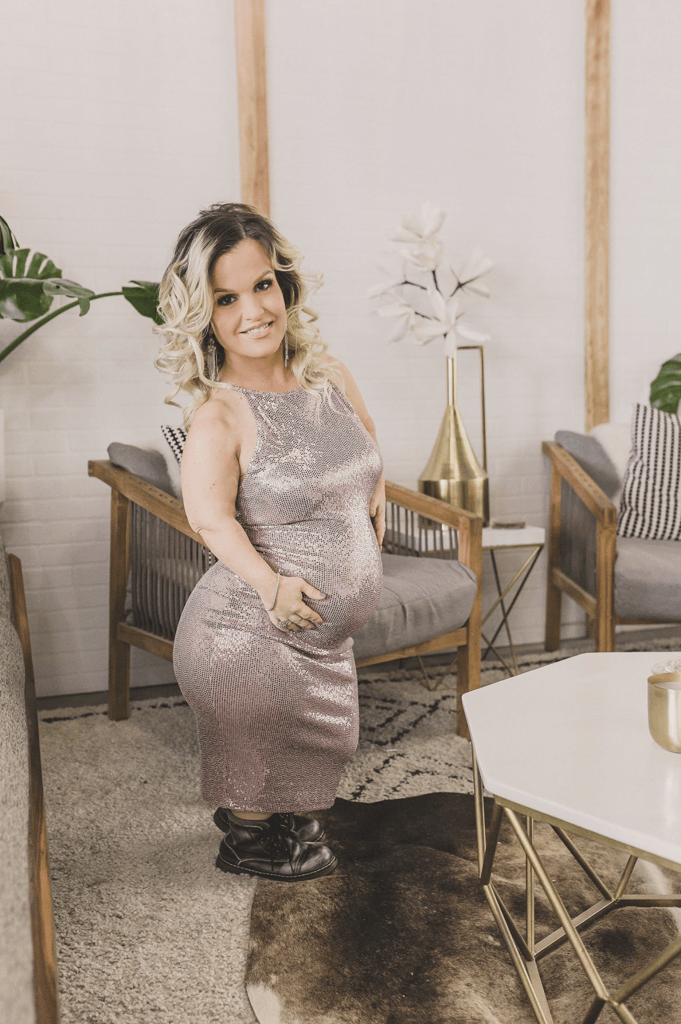 Penny has had a major year! Surgeries and so many milestones. How has that journey been for your family?

Penny has had a major year and so many people around the world have been cheering for her milestones. This journey has really taught us strength and courage. Her hydrocephalus condition has helped us bring awareness to other families and taught us probably more than anything to be patient. I’ll never forget after Penny’s second hydrosurgery. She didn’t talk, want to leave her room, was a totally different Penny for months. Brain surgery is a big deal, so we let her recover at her own pace and once she started to take off there was no stopping her. It’s kind of like our family, once we learn what life is like with our third addition, there will be no stopping us.

Follow along with Terra and her family at MiniMama.com