We’re nearing the end of a crazy year. We decided to take a more personal approach and share the story of what birthed the partnership and business of Advanced Breastfeeding Support.

Part of the discussions we have with our families include the saying “no two babies are alike, and no two breasts are either.” That saying holds true for my personal breastfeeding journey that started about 6.5 years ago. 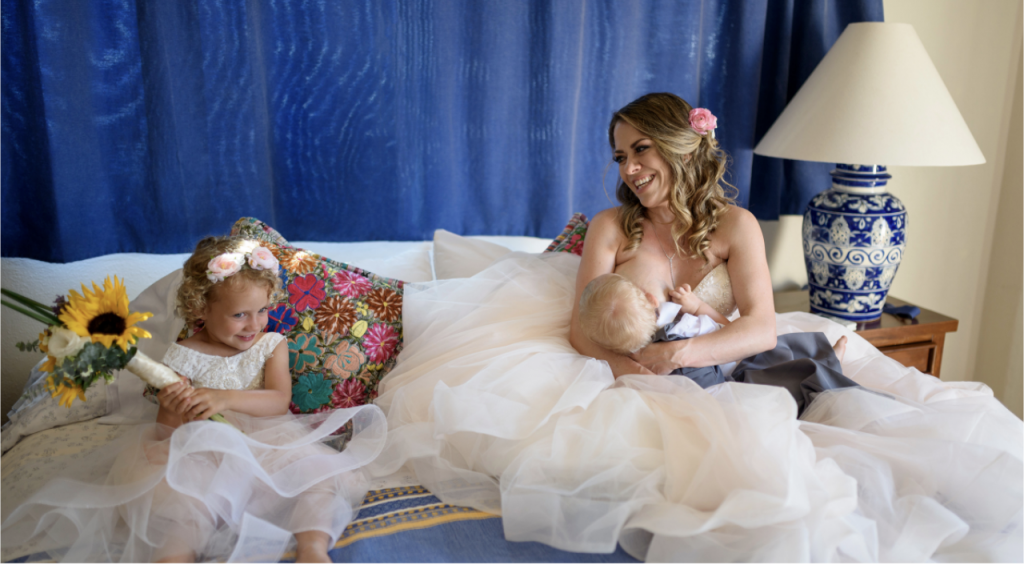 I always knew I wanted to breastfeed. My mom told me stories and I had it set in my mind it would be so magical and easy. Fast forward nine months. My birth plan didn’t go the way I envisioned. It ended in a cesarean delivery. Our breastfeeding journey appeared to start off without a hitch. When we got skin to skin, she went immediately to breast. It was one of the most amazing memories in my life, even though it’s hard to remember details because I was on so many meds.

The magic continued for another 24 hours. Then she started cluster feeding, and didn’t stop. I asked for help frequently, but was told it was normal. By the third day, waiting to be discharged, my daughter spiked a fever around 101F. She ended up being sent to the NICU. We discovered her fever spiked due to dehydration. Her poops and pees were normal, and she showed no signs of jaundice. But it was clear she wasn’t getting enough milk from me. My nipples were raw, bleeding and more sore than my cesarean pain. The nurses slapped a nipple shield on me and set me up on a pumping schedule. She was started on formula, but soon I was able to pump enough to be her primary source of nutrition.

A Winding Path to Relief

Five days later, we finally brought her home and get back on the track. I really didn’t get any feeding or supplementation instructions upon discharge. We breastfeed, on demand. By the time her follow up came with her pediatrician, instead of gaining an ounce a day, my baby was losing weight. Feedings seemed textbook, she would fall off “milk drunk” with milk falling out of her mouth. I had stopped pumping, so the pediatrician had us start formula supplementation again and started me back on pumping. He then referred me to an International Board Certified Lactation Consultant (IBCLC).

After my initial consult with my IBCLC, Lisa, I was overwhelmed. My baby wasn’t transferring milk, my pump was ineffective and I was fighting an uphill battle with a starving baby. She believed my baby had a tongue tie and referred me to our local pediatric dentist for an evaluation, as well as a pediatric chiropractor for bodywork. Both of these ideas seemed so foreign to me, but I wanted to breastfeed so badly. At that point, I was willing to spend any amount of money and do whatever I had to do.

We started a crazy ritual of breastfeeding, bottle feeding and pumping with a rental hospital grade pump, which is known as triple feeding. Our pediatric dentist wanted us to continue bodywork because she wasn’t sure if the tongue tie was causing the issues. We continued this difficult routine for two months.

Now my baby was 2 months old and we realized that the bodywork was not cutting it. We decided to get the tongue tie released. On top of the triple feeding routine, we had to do lifts of her tongue every 4 hours. That didn’t make for a happy baby. I was still using a nipple shield and sometimes a special device called a supplemental nursing system, but all I wanted to do was breastfeed my baby. A week or so after the release, she started to refuse to latch with the nipple shield, started refusing supplementation and started breastfeeding. I realized we were doing it! At that point, formula was out the door and my milk volume started to become more than what she needed.

Not The End of My Journey

You would think that would be the end of my wild journey? Nope. Out of nowhere, I saw a huge lump appear on my right breast that looked like a big grape. My lactation consultant advised me while she was out of town. After trying everything it didn’t go away. I went to my OB, who was less than helpful and only told me “you have to get that milk out,” – well duh! When my IBCLC returned, she immediately got me to a breast specialist who did an ultrasound and finally confirmed it was an abscess.

A doctor drained the abscess twice with a huge needle, but it returned each time. By my third trip, I was in the most excruciating pain of my life. My doctor had to cut open the abscess to get the milk out. Turns out, it was a suture from a previous breast surgery that was blocking my milk from getting out. The breast surgeon then referred me to a plastic surgeon. He assessed and dug in my wound, only to come up empty handed. They could see the suture in the ultrasounds, but couldn’t find it during the removal procedure — it probably didn’t help that milk was pouring out of my wound the entire time. He said sorry, and sent me on my way.

I was sent home without any instructions on how to care for this huge, gaping wound. I ended up self referring myself to a wound care doctor. I could see it wasn’t healing correctly, from my previous work experience as a wound care nurse. My journey continued for 2 months and my doctor was so supportive. He adjusted all the treatments to ensure that it was safe for me to continue to breastfeed.

The Rewards of Perseverance

Once my wound healed, things went well besides a few bumps in the road. Looking back, this entire process was the hardest thing I’ve ever done; but also the most rewarding. I may have battle wounds to commemorate this journey, but most important, I was able to experience an amazing bond with my beautiful baby that I will cherish for a lifetime. My initial plans were to breastfeed until 1 year old. We ended up continuing our journey for 3.5 years even through tandem nursing after I had my son, whose journey was much less dramatic.

Helping Others Through Their Journey

This is where I started to envision my new career path. I wanted to help women along their journey. I wanted to provide the help that I was so desperately looking for on my own breastfeeding journey. I started my education for becoming an IBCLC, met Laura, and shortly after meeting her, became her mentor. I knew we would be a great team! And we are! We have helped so many women in the community, and only dream to help more.

Stay tuned for Laura’s story next.

Special Needs Mama: A Little Look at My Life with Lennon

0
LasVegasBabyMag December 18, 2020
No Comments Yet